Geofoam Takes a Walk in the Park Civil engineers are turning to Geofoam as a soil substitution solution for many projects such as retaining wall backfill, road embankments, bridge abutments, a slope stabilizer, highway construction and airport runways to name a few. It has been proven to solve many geotechnical problems cost effectively and the acceptance for this versatile product verses a traditional fill is expanding into new markets as well. At the Chicago Daley Park project, Geofoam is showing its fun side.

The Maggie Daley Park rooftop project consists of 20 acres and is being transformed into a mega park that will include over 1,000 trees, climbing walls, a quarter-mile skating ribbon, a café, and a children’s fairytale playground. When this park is completed it will also be the second largest green roof in the country.

According to WTTW Chicago tonight, “In a city that’s renowned for being flat, the ambitious park will have an undulating landscape that will create rolling hills Chicago so sorely lacks. The Geofoam will make that happen. Park officials say Geofoam is eco-friendly and an ideal material because of its durability and weight.”

The project persevered throughout the winter of 2013/2014—the winter we all would like to forget. The product characteristics of Geofoam allowed this project to continue and stay on time and on budget. The seven truckloads a day continued to arrive in snow, sleet and rain. Traditional fill such as soil would have brought this project to a halt waiting for sunny days to arrive.

Geofoam takes on serious projects such as protecting gas lines, slope stabilization, and road and bridge construction. But in Chicago, it is proving to have a “fun” side, making this park project possible. The park is scheduled to open in 2016.

Although the construction for the full 25 acre park is not yet completed, Maggie Daley Park had a ribbon-cutting for the skating facility portion. The rest of the park will be off-limits until Spring, ending a two year long project. Enthusiastic skaters of all ages hit the ice at this one-of-a-kind skating ribbon. Unlike traditional rinks, this rink winds around like a river, is twice the length, and can accommodate up to 700 skaters. Inside the winding arena are a climbing wall, marine-themed play area, a multistory wooden play set, and a 30 foot suspension bridge, which will also open in spring. In the summer, the skating ribbon will be used for roller skating, scooters, gallery exhibitions and special events.

Memories of the length of the project and the construction using Geofoam to build the topography of this park above a garage parking deck will fade away and be replaced by the endless years of enjoyment the park will bring to many. 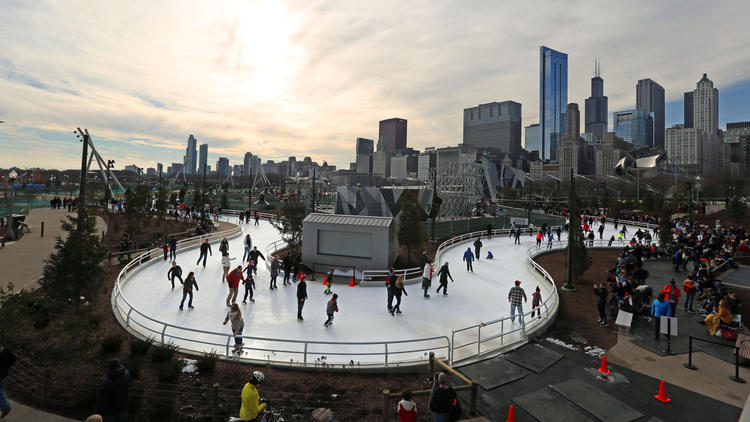 Maggie Daley Park has entered the final stages of construction. The design team and landscapers are now focusing on the Ice Ribbon, the first of two Climbing Walls, and the foliage plantings. The playground will start taking shape  as well as the 30 foot tall suspension bridge.

This article was posted on April 29, 2014, by Insulation Corporation of America (ICA) – a Women-Owned manufacturer of Geofoam and Expanded Polystyrene (EPS), which is commonly but mistakenly referred to as Styrofoam™. ICA is located in Allentown, PA and services the entire Mid-Atlantic Region from Virginia to Maine to Ohio.

Geofoam Gets Skating
EPS Foam – Who Says It’s Not Recyclable?