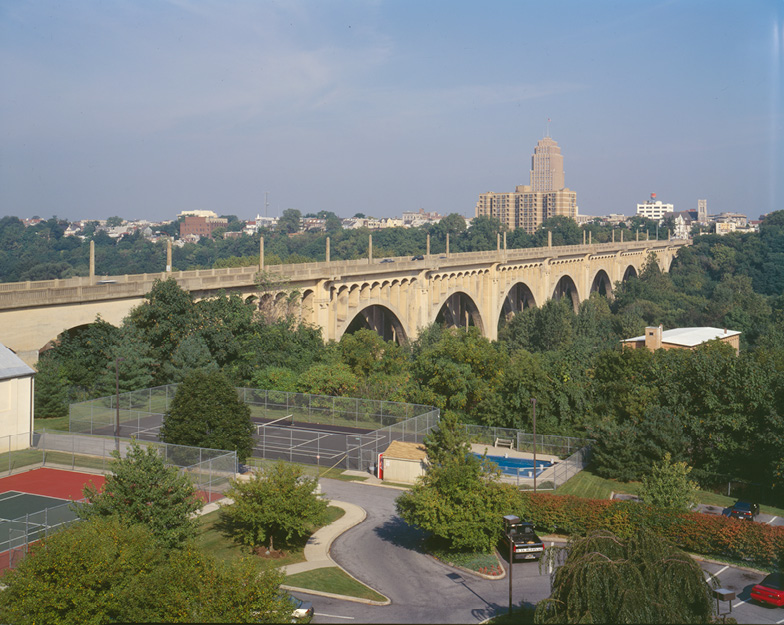 Below we share the story of this GEOFOAM bridge project with locally sourced ICA-GEOFOAM.  When the 8th Street Bridge was originally built in 1912-1913 it was considered to be the largest concrete bridge in the world. This iconic 100 year old structure that cost a little over $500,000 to build had fallen into a state of disrepair and was in need of a major overhaul. The $18,000,000 revitalization project was awarded to IEW Construction Group by PennDot1.

The bridge’s original construction consisted of 45,000 barrels of cement, 29,500 cubic yards of concrete, 20,000 tons of sand, 36,000 tons of crushed stone and more than half a ton of reinforcing steel. Among the materials required for the reconstruction project, the PennDOT specifications called for “light fill polystyrene” to lighten the load of this 2,650 foot bridge which rises 138 feet above the Little Lehigh Creek.

IEW, located in Trenton, NJ, turned to an Allentown company, Insulation Company of America (ICA), to fulfill this specification. ICA manufacturers expanded polystyrene (EPS) which, when used in block form, as in this application, is referred to as Geofoam. The lightweight attribute, along with its strength and stability, made ICA-Geofoam a cost saving decision for this project. The southbound portion of the bridge project is complete and IEW is ramping up to start the northbound. The work performed by IEW includes replacing the bridge deck, constructing new alcoves, repairing bridge piers, reconstructing roadway approaches, installing new ornamental lighting, concrete curbing, concrete sidewalk, protective fencing, pavement markings and signs. Being restored to its original beauty, the new construction is sure to last beyond the next century.

Some interesting facts about the 8th Street GEOFOAM Bridge Project include:

1PennDOT has turned to ICA-Geofoam for other geotechnical applications including the Pierce Mill Road Project where Geofoam solved the unstable soil issue.

2Albertus L Meyers actually played the coronet in the opening ceremony as a young boy and spent his entire musical career in Allentown. He was 83 years old when the bridge was renamed in his honor.

Photos from the project, which will continue this year:

Check back for updates!

This article was posted on June 4, 2015, by Insulation Corporation of America (ICA) – a Women-Owned manufacturer of Geofoam and Expanded Polystyrene (EPS), which is commonly but mistakenly referred to as Styrofoam™. ICA is located in Allentown, PA and services the entire Mid-Atlantic Region from Virginia to Maine to Ohio.